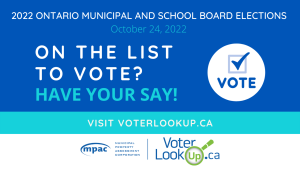 The nomination form shall be on the prescribed Form 1, must be completed and signed by the candidate and shall be filed in person or by an agent between May 2, 2022 and August 19, 2022 by 2:00 p.m. Facsimiles and emails will not be accepted. The clerk has until 4 p.m. on August 22, 2022 to certify or reject your nomination. The clerk must be satisfied that you are eligible to run in order to certify your nomination. If your nomination is not certified, your name will not appear on the ballot.

Boards of Education, pursuant to the Education Act and Regulations, shall determine by March 28, 2022 the numbers of trustees and the distribution of the trustees in geographic areas across their jurisdictions to be elected to the respective boards. Nominations will be accepted for the office of trustee for the following school boards:

Nominations may be filed in the office of the clerk in the municipality with the largest electoral population for the respective board in the geographic area within which the municipality is located.

Information for and About Candidates